The ability to keep a GOOD attitude while waiting... 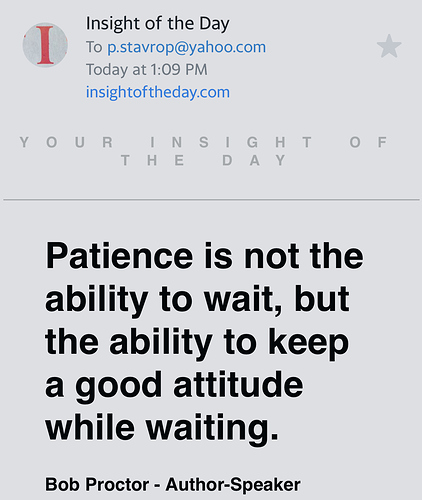 D99E505A-83F1-4834-966A-040575342B3D.jpeg1125x1330 299 KB
Immensely important observation! I have realized that, when I am running on the treadmill (so essentially a stamina exercise kind of like no PMO), keeping a strong attitude (kind of like a surfer who is on top of the wave and he bends it to his will instead of barely hanging on) makes the exhaustion and suffering much less painful but also makes the stamina spending much less. Whereas when you feel like you are barely hanging on exhaustion comes almost immediately. So even if you feel like you are about to fall to your knees (metaphorically speaking) keep pushing until your knees actually give in, don’t think “I am about to give in” just keep pushing obsessively until your own body gives in. So in short, don’t let your mind give in before your body. Our brains are truly some short of super power. All of us here are like little heroes on the beginning of their hero Journey towards the birth of a truly noble beast which slumbers inside of us! Rage, RAGE against the dying of the light!
andrej 2020-04-26 14:41:56 UTC #2

So true. For me personally, NoFap was the thing that changed my life, but it wasn’t NoFap only and that is my point. NoFap lead me to cold showers which lead me to bodyweighgt threning and consistantly reading book and much other things. Patience is key

I hear you. But I’m in a really bad place at the moment. Have become soooo addicted that I dont think I have an ounce of testosterone left in my body… I’m so depleted in physical and mental energy. I’m at he lowest of lows. I fear that I might di something stupid to end the pain.

So basically nofap got you into the self improvement community. Idk but i think most enter the community thought nofap or hearing about nofap.

I think i got into the self improvement community because of some nofap/nofap debunked video then algoritm recomended me some self improvement stuff i dont remember. never acttualy did nofap but i whould say the self improvement community was a overall good thing , like learning about website blockers and recognising that i was addicted to reddit (which was really the hardest step , figuring out it was a problem in the first place , quitting it was way eazier than i thought considering it took up every single minute of my spare time , didnt really need to battle any urges except one time on i think about day 7 after i turned off my site blocker (which did most of the legwork by helping my catch myself before mindlessly scrolling tbh) because i wanted some info which happened to be on reddit and started browsing for 5-10 min) and even then it was a slight urge rather than anything powerful , other than that , basically fucking none , its more of a habit than a urge and site blockers help a lot with habits.