Why is this a good thing. I love inter-Barracks banter.

It’s not a good or bad thing, it’s just something some people want

Is it accepted? If so, I wish to contest, but it’s obviously fair game to over-rule me if I’m the only one. I just think we’re all stronger together.

It’s up to the owner what he wants to accept. This is just a list of suggestions from users.

@fabflop I can’t edit this thread anymore, can something be done about that? I guess editing posts is disabled after it’s 2 months old?

Hmm, I still can edit it. I didn’t find any buttons or menus who said that editing is disabled…
If you still can’t do it, you may want to add new features in a comment?

I have that… Cool, this mod rights!
Perhaps we can ask @PierceFranklin to make you a mod here?

Maybe should we add statistics to the war. Simple graphs showing Alive/KIA numbers and engagement numbers per day, per empire and per barrack.

That would be cool, but on some background site. It doesn’t need to be seen at the first glance.

a) For Notifications: I should be able to choose what type of notifications I see. I don’t particularly care for notifications when people like what I post (it’s nice but not required) but I do care about when I’m tagged in a post and don’t see it because it’s buried between “x likes your comment” and “y posted in z thread”.

This gets a little complicated and it may be better just to implement this community side, but survivors of the war could have be put in “official” (if only in title) positions of their barracks. It’s just extra incentive for surviving the war and an additional reward for survivors. So, for instance, whichever veteran has the highest stars gets put in a “general” position for the empire, and then remaining veterans get put as “barracks leaders”. This could entail high community engagement (a kind of commitment) or could just be for the title.

That’s right, @fabflop. Maybe it should be displayed here.

Awesome feedbacks guys, keep em coming. We may be slow to integrate these due to budget and resources but we’ll make sure that each war is better than the previous one.

Seriously though definitely think we need a way of avoiding the endless scrolling on a popular post. Otherwise, posts tend to “expire” when they get too long.

I would like 4 or more teams more than 2 empires and 8 barracks.
The (positive) competetiveness would be more exciting if we have a clearer team to battle for.

Maybe a fun idea would be to battle for fictional Nations that would still all represent a quality like the barracks now do. The identity of a group to fight for will be stronger I think.

Also something must be done with the popular threads. They become too long with all the many reactions to read.

Maybe a karma mark that bar that takes longer to make higher.

-A “report bug” feature.
To report bugs that don’t require a whole thread to themselves (like misspellings in the site, buttons that don’t work in some cases, etc…) 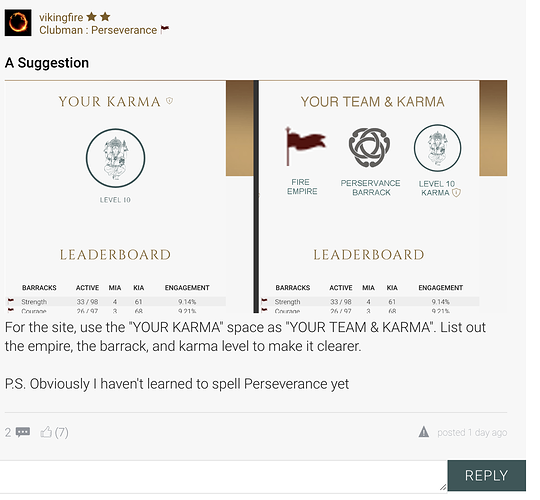 A Conquered Self app for IOS and Android.

@PierceFranklin I would REALLY love the ability to look at my old war posts, even if they are archived. I’ve written a lot of stuff it would be helpful to look back on, and I’m sure others feel the same way.

Yes, kind of a search function would be really cool, @PierceFranklin!